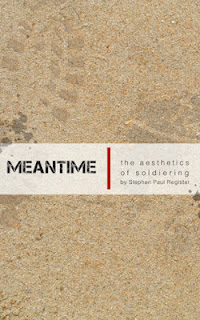 Meantime: The Aesthetics of Soldiering by Stephen Paul Register is the memoir of a soldier on several tours of duty--Operation Freedom, Katrina, and the like.  This is his story.

This book often felt like a sporadic read--very few consistencies in story telling and definitely no arc to the story.  Register's anecdotes are sectioned off into chapters but are told in fits and starts--often it is hard to tell which war or location he is speaking of.  We as the audience jump time and place in the same chapter so that one moment you are camped in the desert of Iraq and the next our soldier is married and at home.  This makes for a super confused reader.

The parts that I enjoyed the most in this memoir were the moments where Register had an emotional connection with people.  The Thanksgiving that he spent on leave at home was the most raw and powerful story he told in this book.  It's hard to not be moved by his account of feeling the rain after being in Iraq for so long.  The moments where Register writes that he spends with his girlfriend, later wife, are beautiful and told with such care by a man who clearly loves this woman and wishes to protect her.  When Register writes about the Iraqi contractor who was kidnapped--my heart hurt for Register and for his friend.  These are the moments that keep the story alive.
Posted by Nicole at 10:44 AM