Portrait of an Addict as a Young Man & Ninety Days

I picked up Bill Clegg's Portrait of an Addict as a Young Man years after reading an excerpt in one of the dozens of magazines that I read.  It came back into my life after the reviews of the recently-released Ninety Days came out, which led me to pick up both and review them in one post.

Bill Clegg becomes an addict at an early age, but in his mid-30's he is a successful literary agent in a loving relationship and a happy man.  Although he has continued to use throughout his adult life, at this point he goes on a two month bender that sends him over the edge and causes him to lose everything.  This is the story of Bill's decent into the hell he makes for himself and the history he uncovers that reveals his past's effect on his current state. 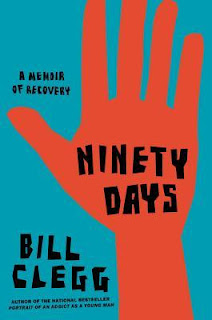 Mr. Clegg's story continues in Ninety Days, focusing on his recovery and the effect of his time in rehab--as well as his relapses before finally getting completely sober.  It's the story of a climb up the ladder rather than the spiral down of Portrait.  He makes new friends, tries to repair the relationships with old ones, and searches for who he truly is without his vices.

I finished each of these books in a day (that makes a total of two days, by the way).  Mr. Clegg's story is riveting and addictive in a way that mimics his manic descent into addiction.  He follows it up with a story that makes you feel as if you are clawing your way into sobriety with him.  You root for him and he breaks your heart when he relapses.  You desperately want him to be the man he was meant to be---and eventually you want to turn to him and say, "Keep coming back."
Posted by Nicole at 9:01 AM