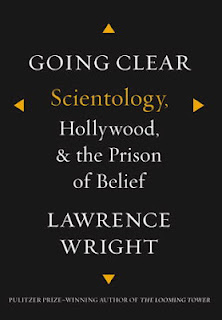 We all know how much I am obsessed with Mormons; well, it's much to your surprise, I'm sure (or not at all), I am equally obsessed with Scientologists. So I picked up Lawrence Wright's Going Clear: Scientology, Hollywood, & the Prison of Belief . Oh, holy hell.

From early writings of L. Ron Hubbard to the celebrity spokespeople, Scientology has been a presence in American religion. In this expose, Wright traces the evolution of the religion from its inception up through its present day iteration as run by Hubbard’s protégé; this missive explores not just the origin of belief, but the absolute dependence on stars to highlight its PR campaigns in order build membership.

I will keep my opinions on the actual religion quiet (and it has been deemed an actual religion based on the definition of “religion” regardless of my opinion on the matter), as I find the level at which the upper echelon operates to be mindful of  (and vindictive toward) all vocal detractors. Instead, I will focus on Wright’s work, which is absolutely outstanding and worth your time to read.

Wright is a journalist of the highest degree. His research is clearly thorough and transparent, and he often seeks to find both sides of a story to present within each major subject heading. He tells a story that has a through-line with life and vigor, so much so that if this were a fictitious narrative tale of one man’s egotistical desire to create a flock of followers by calling himself the messiah, I would buy it hook, like, and sinker. Wright is a superb non-fiction storyteller and I can’t wait to pick up his other work. He has told an unsettling and goose bump-inducing tale that just happens to be based in reality. [Insert a shiver here.]


Another thing I found interesting about the history of this religion is how closely Paul Thomas Anderson’s The Master lined up with what Wright has written as the early beginnings of the religion. I found myself getting super creeped out by the story the more I read, so much so in fact I told my mother on the phone that I had an irrational fear that someone would come to my house without my permission to force me to stop reading more. This book is a superb piece of work and I would highly recommend it to anyone interested in the subject, or great journalism, or Lawrence Wright.
Kindle copy on left, hard copy on right.