I'll Take You There: A Novel 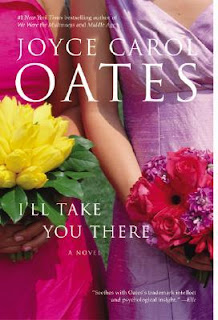 It is my (newish) tradition to bring a Joyce Carol Oates book with me when traveling abroad. In Finland and Estonia it was them, and this time, all over Eastern Europe, it was I'll Take You There.

Our unnamed author is a young woman in the 1960's from a small town in upstate New York. Her mother died when she was an infant and her father has worked on the road as long as she can remember. When she goes off to school, she joins a sorority, only to find that it is causing her to go crazy. She becomes obsessed with a handsome stranger, and in the course of her second year of undergrad manages to lose her mind and find her voice.

Let's be clear about something from the get-go. I love JCO. Whole heart and soul. A dear friend told me this was her favorite so I added it to my Kindle and I agree with this friend--the book is solidly marvelous. I didn't want to let it go when I had to take a break; I found myself so compelled by this young woman and her story that I wanted to grip the book with a vice.

I was stunned by the first section, which is the author cracking up in her sophomore year in the sorority house of Kappa Gamma Pi. It was so hauntingly close to my sorority experience (without the cracking up part!) that it shook me. JCO writes in the Afterwards that while she also didn't crack up, she found herself in similar situations with fines and such due to her need to work. It was such a stunningly beautiful section of the book that I was almost afraid the next two-thirds couldn't live up.

I will admit when I'm wrong. It was fabulous. Heartbreakingly honest and raw, JCO has no problem building our love for and empathy toward such a lovingly flawed character to the point where we are willing to jump into the pages and rescue her oursleves.

What I love most about JCO is her deep and abiding skill for writing strong female characters. Underneath the fatal flaws, the tragedies, and the true-to-life experiences she writes with such adeptness are female characters that feel, fight, and survive. JCO writes with such elegance that I fall in love with each book for it's own reasons, but always for the same--lovely, full-arced woman. Basically Ms. Oates, this is my love letter to you.

Kindle version on the left, hard copy on the right: