Run, Brother, Run: A Memoir of Murder in My Family 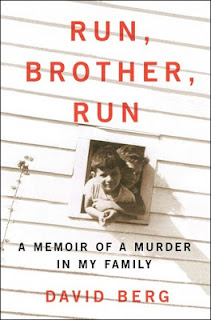 It's true crime time! Oh, how I lovelovelove true crime. Run, Brother, Run: A Memoir of a Murder in My Family by David Berg.

David has always worshiped his older brother, Alan. Between dealing with their divorced parents (a kooky mother and an overbearing father), the two can rarely catch a break. They always had each other, though, to survive their childhood. One night Alan disappears after work while grabbing a drink with a pal. The happily married father of two with one more on the way is not one to just vanish, and David knows something bad has happened. When the police give up on the case, the family continues their search on their own. After months of searching and hundreds of tips, they find Alan's body. It doesn't take long to find the killer--it is Charles Harrelson, father of soon-to-be-famous actor Woody. Can justice be served in their hometown of Houston? Or will Harrelson get away with murder only to do it again?

Berg's story is fascinating and full of twists and turns. He is a lawyer, and I found this to bring a particular interesting perspective to the part of the book focused on the court case. My heart stung for him as he went through the judicial process, his knowing full well that it's not always about guilt or innocence, rather it's more about the game being played in the courtroom. And this trial was the Monopoly of court cases.

I remember years ago my mother telling me that Woody Harrelson's father was a killer, so when I saw this book I had to pick it up. I went into it with an open mind, not wanting to hold the sins of the father against the son but also to find out what kind of killer Charles was. A serial killer? A contract killer? A rogue hit man? A bar fighter? What he turns out to be is what you will find when you read the book, and I can't say that I have been swayed in a particular direction regarding my thoughts on the matter. I will say, though, that this book has colored my thoughts and has given me insight that is a little more personal than I would have gotten through the Wikipedia page.

It's worth a read if you love true crime on the level that I do.

Email ThisBlogThis!Share to TwitterShare to FacebookShare to Pinterest
Labels: Crime (True or Not), eBooks, Memoir