Save the Date: The Occasional Mortifications of a Serial Wedding Guest 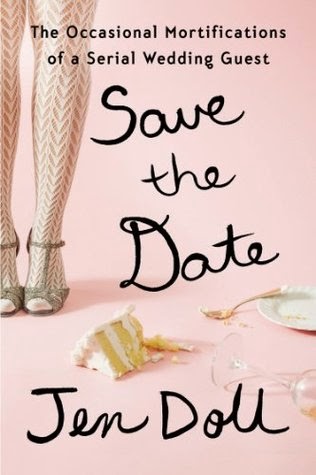 I can relate to this title so hard it's glorious. This is Jen Doll's Save the Date: The Occasional Mortifications of a Serial Wedding Guest.

Jen Doll can track her own life progression through the weddings she has attended--for better or for worse. Each wedding highlights a time of finding out who she is, behaving (but mostly not), and exploring what it means to be married. When you tie the knot, it's a commitment, and regardless of your feelings toward those relationships, you eventually have to put them aside, raise your glass, and eat your cake. But those stories that live on in infamy--well, they are worth keeping around, too.

Oh, how much Jen Doll and I have in common. Sometimes the bridesmaid, always the guest, thankful to never be the bride. I felt myself relating to Jen very closely as she went through her slew of weddings, through the excitement of the first destination to wedding to the relief of the local wedding fifteen years later. I can even relate to her story later in the book of being the wedding guest at a significant other's friend's day. I was once the plus one, but my date hadn't bothered to RSVP for me. That's right. I was an extra guest, an inadvertent wedding crasher. I have never been so mortified as I was that night. We ended up at an empty table in the back, just the [awkward] two of us. Needless to say, he and I broke up for many reasons, some of which I you can glean from that story.

[Later I became a real wedding crasher, but that's a story for another time.]

I, like Jen, remember those first few weddings out of college. The excitement over the novelty of two people choosing to vow to spend their lives together. Meals with college friends that you would one day only see once a half-decade. Getting dressed up and praying to be a bridesmaid. The first time I traveled for a wedding and the first time I embarrassed myself at a wedding. I remember those mixed feelings about going to weddings in my early 20's single, fending off the questions about my own dating life. I remember when I learned to not invite a plus one unless they are in my life forever, because nothing ruins a group shot in the long run like an ex in the photo. I really wish I could edit both him and her out of that one photo.

But, like, Jen, I have also found peace in weddings. I love going to them now, it just took me a while to be OK with going at them alone. Now I want to go at them alone. But I have also learned so much along the way. I have some crazy stories, although I haven't had the whole accidentally-slept-with-a-married guy thing that Jen fended off before it happened. This book was well worth going through the journey with Jen. If you were married young and have been on your own separate journey, pick this book up to get an idea of what singledom at your nuptials looked and felt like. If you are a life-long single, pick up this book to see your own journey reflected. It will be worth the few hours you spend in it.

Hard copy for purchase below.
Posted by Nicole at 1:56 PM