A Circle of Wives: A Novel 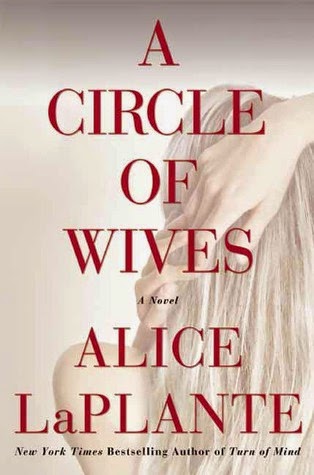 I didn't really remember what I was getting into with Alice LaPlante's A Circle of Wives. I read the blurb a while back, added it to my queue, and then just remembered that I wanted to read it. OH EM GEE. WHAT A RIDE.

Was John murdered? A popular and well-respected doctor, he turns up dead one evening in a hotel room of an apparent heart attack. Things start to get suspicious, though, the more the police learn about John. The three wives meet each other at his wake, two of them oblivious to the others. What makes a man take three wives? What makes a woman accept her husband having others? Who would hate this man so much they would murder him?

I clearly misread the description of this book, because I thought it had something to do with religious polygamy. Then I read it, and who cares what I originally thought? This book was about polygamy, but not the religious kind. It was a kind that makes you wonder how on earth two of three women couldn't realize that they were married to a man who had other wives?

Now, I'm not sitting in judgment. I have referenced this before, but I've certainly had the wool pulled over my eyes. It's shockingly easy to have that happen when you want to believe things one way that it might even remotely appear another. But this story was really fantastic. It's told from the perspective of the three different wives and the detective who is investigating the murder of the husband while her own relationship falls apart. The wives were all different people, and they all served a need in the husband's life that wasn't the filled by the other two. It certainly begs the question of whether or not marriage is in outmoded concept with this thought. Is there just one person who can meet all of our needs for the entirety of our lives? (I'm not saying I have an answer. Even if I did, I probably I wouldn't post it here.) Obviously the dead husband didn't think so.

That was probably the most fascinating aspect of this book – the relationship between the husband and each of his wives, and then the relationship they build within themselves. They're not friends; rather, they have a relationship with each other even if they don't speak to one another. And the truth of the husband's death? Well, that may surprise you.

Hard copy for purchase below.
Posted by Nicole at 8:42 AM