The Unspeakable and Other Subjects of Discussion 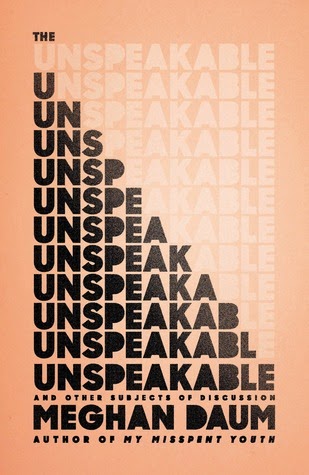 I had read a piece by Meghan Daum in recent months and really liked her writing, so I jumped in the queue for her new book of essays, The Unspeakable and Other Subjects of Discussion, in order to get it as soon as it was released.

Hands-down, I adore Meghan Daum. Other than Roxanne Gay, I would say she's my spirit animal. Can they both be my spirit animals? Is it possible to have more than one? I'm going to say it is, and call them equally my idols. Look, life is full of the hard and the not so hard. How we deal with this defines us, but it's also just a general part of living. Daum embodies all of this in her essays. Whether it's talking about being an honorary dyke, which resonated so strongly with me, or talking about how much she hates to cook, which did not at all because I adore cooking, it felt like she was speaking directly to me and that she just got me. It felt like this book of essays was written for me, but I also imagine that anybody who reads this book of essays feels the same way. While I don't know her personally, I have a feeling that Daum lays herself out on the line in her work. She is who she is, and she doesn't pretend to be anyone else. It may be why she is so maligned, as I've read in a previous essay of hers, but I also appreciate that in my essayists. When I read an essay on how much you love your dog, and it's well written, it makes me feel as though we are friends.There were some essays that spoke more to me than others, which I mentioned above, and one also on her dating life. I have never really struggled with my disdain for dating. I have always been fairly unabashed in my vocal hatred of the practice. It's never particularly bothered me, even though I went through phases where I desperately wanted to want someone. She embodied my exact feelings on the matter.

She discusses her dating life, which sounds suspiciously similar to mine (page 51): "But here was the thing about my dating life. I spent most of it with absolutely no eye toward making a permanent committment. What I was in it for, what I was about, was the fieldwork aspect. I wasn't looking to be delivered from the lonely haze of bachelorettehood into the smug embrace of coupledom. I was looking for experiences, for characters, for people who paid other people to chant and beat drums while they lay on massage tables wearing flashing LED sunglasses. I regarded my love interests less as potential life mates than as characters in a movie I happened to have wandered into." Sound suspiciously like anyone you know who runs a dating blog in addition to a book blog? [Awkward silence.]

I love goofing around, having good stories to tell, and then going home and laying on my couch by myself not feeling like I have to entertain anyone or be a part of the team. I am a social being, but I am a loner by choice. Whether she is or not, she felt the same way to me, and maybe that's part of why I consider her one of my spirit animals.

There is an essay, called "Honorary Dyke," where Daum explores the idea of what it means to be a butch. She calls it being a phantom butch, which she describes in great depth. I don't want to quote the essay here because you should read it yourself, but suffice it to say that I found myself fully defined as a phantom butch about 55% of the time. To be clear, this isn't about how you look, but about how you act.

Clearly I loved this book, and I would highly recommend it.

For purchase below.
Posted by Nicole at 10:50 AM