We Should Hang Out Sometime: Embarrasingly, A True Story 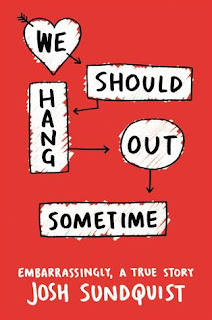 I think this is the first true story I’ve read all year—outside of AP Euro. Josh Sundquist takes us on a data driven journey to discover why it is that he’s had such difficulties with the opposite sex. The result is a super lighthearted and hilarious recounting of the many cringe moments, misunderstandings, and episodes of obsessive over-analysis that got him all the way through college without ever having a girlfriend.

Josh Sundquist was a normal kid until the age of nine. Then he was diagnosed with cancer and lost his left leg from the hip down. Things changed. Josh was forced to figure out how to navigate his disability socially when everyone around him still had all their appendages. There were two rules to doing this:

Despite his obvious differences, Josh refuses to be treated differently. He strives for normalcy, but never truly comes to terms with his disability.

This not coming to terms continues in his interactions with the opposite sex, specifically: Sarah Stevens, Liz Taylor Smith, Francesca Marcelo, Evelyn Williamson, Lilly Moore, and Sasha Wright. They all get their own sections of the book and the stories are hilarious. The graphs are hilarious. The book’s title is based on an interaction with Francesa Marcelo where the Josh decides that the best way to ask her out is simply by saying, “We should hang out sometime.”

By the end of the book I found myself rooting for Josh and he totally makes it happen. You’ll love him. You’ll love is anecdotes and his insights. You can totally finish this book in an afternoon and it will make your day.

POGS
~ Charlotte
Posted by Nicole at 1:54 AM