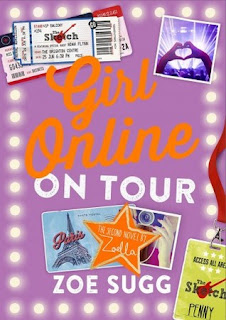 So this is the second offering from the amazing Zoella, the YouTube tastemaker otherwise known as Zoe Sugg. Sugg’s first novel, Girl Online, broke all kinds of sales records for debut fiction largely due to the success of her YouTube channel.

I love Zoella and I loved the first book (my review here) because it promised even more Zoella and in a whole new light, or so I thought. It turns out the book was ghost written by an author I’d never heard of named Siobhan Curham. This was kind of a let down, but I got over it. Zoella sort of owned up to the fakery and promised to be totally hands-on with Girl Online On Tour.

On Tour picks up at just about the place where Girl Online leaves off. Penny is officially dating rock star Noah Flynn and missing him like crazy while he’s away on a world tour. Her infamous blog is now mostly private. She lets only a few of her closest friends and her photography teacher read it. She’s still reeling from the scandal that exposed her blog and is now more private and anonymous than ever.

The cool thing about Penny’s life is that she gets to spend the summer on a European tour with Noah Flynn. Best summer ever, right? Yea, not so much… The pressures of fame and life on the road strain the relationship and things get rocky.

I can’t say I was surprised by anything that happens next, nor do I think you’ll be. Really, the only reason to pick up this book is if you are a diehard Zoella fan like me. Unlike the original Girl Online, there’s lots of Zoella in this book and it’s exactly the fix I wanted.