Guest Blogger Charlotte: Nice Is Just A Place In France 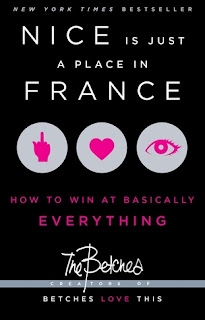 When I picked up Nice Is Just A Place In France, I did so without knowing exactly what I was getting into. I found it in the same section as other books I had read and enjoyed and the title caught my eye, which is probably at least somewhat due to the fact that I’m from France.

The thing with Nice is that’s it’s much more of a self-help manual than anything resembling a novel along the lines of what I normally review here. So there aren’t characters or storylines to get into. But there are Betches.

The team of girls who wrote the book refer to themselves as “The Betches.” You’ll find them listed on the cover and referred to throughout the book as just that. And the book is about teaching you, the reader, how to be a “Betch” like them.

A Betch is not one of the “nicegirls.” Betches believe that nice girls are destined to lead lives of boredom and cats and that no one should or would ever want this. Though they spend pages and pages defining the Betch, The working definition of “The Betch” is best described as a fairly aloof, alpha female whose main weapon is manipulation. That’s right, this book is basically a recipe for how to succeed in the world as kind of an awful person on your way to becoming Miranda Priestly.

The book is really funny at times. The Betches most certainly have a way with words with lots of LOLs throughout the book. The tone is very Amy Schumer with some Chelsea Handler mixed in. The book absolutely gets rant-y and even downright mean at times.

If Nice is intended to be a joke where we’re all laughing together, then it totally works. However, as a self-help manual, it’s sad and falls short.

For purchase below.
Posted by Nicole at 1:07 AM