While The City Slept: A Love Lost to Violence and a Young Man's Decent Into Madness

Well well well. I have had many friends ask recently, "Are you still blogging?" I wanted to say yes, but I realized I haven't blogged once this calendar year. How embarrassing. My life got in the way, but now that I will be attending Book Expo America in Chicago next week, it's time to return to this lovely passion project of mine and catch you up on some of the books I have read this year.

Unfortunately, there haven't been many. It's been a result of my inability to read for pleasure. I just haven't been able to get through many books. I read a whole one this weekend and almost died with happiness. I think I've turned a corner, so let's get started, shall we? 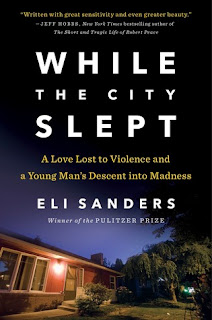 Eli Sanders' While The City Slept: A Love Lost to Violence and a Young Man's Decent Into Madness was a February read, and one that was truly outstanding. I had heard about this murder a few years ago, and I didn't put two and two together until I was about a chapter in. I gasped when I realized.

One hot summer night in 2009 in a lovely little neighborhood outside in Seattle, a couple is sleeping when they wake up to a man in their room. Hours later, one runs screaming from their home, bloody and scared. Their neighbors do what they can do keep the two women alive, but half of the couple doesn't make it. What happened that night? Who would conduct such an awful, inhuman act on two sleeping women? The answer finds the reads backing up a long, winding road of the life of a young man who slowly descended into a mental break that would affect the families of all three players forever.

Sanders has done a really wonderful job of telling a story from start to finish that could have been impossible to read, as the harrowing details of what Teresa Butz and Jennifer Hopper lived through are unbelievable and angering at best. These women were simply sleeping with their windows open; Teresa lost her life and Jennifer lost her partner, not to mention the hours of agony and torture they went through, done by a young man who grew up watching his father abuse his mother and his family be unable to deal with his mental illness. It's almost too much, but Sanders has built a story that pushes the reader to the breaking point and then backs off, focusing on other aspects of Seattle and the lives of Teresa and Jennifer. He has created such a clear and focused picture of these two women as both individuals and as a couple. This book must be such a tribute to the story of who these women were together and apart.

I think that stories like this one are so important to present to a larger audience; these women deserve to have their story heard over and over and over again. It's about more than just healing, but also about a recognition that mental health care for all is so vital for building and maintaining a society that gives access and provides safety for all. You can read the book for yourself and see the incredible argument that Saunders builds. In the final chapter, he makes it clear that the lack of affordable and accessible mental health care in this country costs our economy $79 billion PER YEAR. Rather than saving by spending on the front end, we would rather spend multiple times more on the back end where we can see it. I hope that Teresa and Jennifer's legacy is that more people will learn that this is no longer a sustainable route.
Posted by Nicole at 6:42 PM

Email ThisBlogThis!Share to TwitterShare to FacebookShare to Pinterest
Labels: Crime (True or Not), Non-Fiction