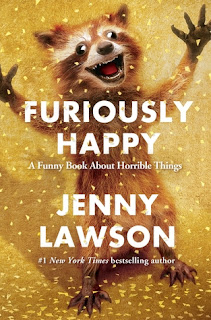 Jenny Lawson is funny. (The author of Furiously Happy: A Funny Book About Horrible Things) Lawson suffers from clinical depression, anxiety disorder, impulse control disorder, avoidant personality disorder, insomnia, rheumatoid arthritis, and a number of other illnesses or disorders. Maybe “suffers” isn’t the right word. As the title of the book says, she strives to be “furiously happy,” which means living an actively happy life in spite of these disorders, almost as an offense to them. She doesn’t shrink back from her quirky wants and desired and try to be “normal”; instead, she indulges them in a quest for happiness.
And so she’s funny. It says so right in the title, and it’s true. She gets into interesting misadventures, does unconventional things that most people wouldn’t think to do, and has funny conversations with both her husband and herself. Funnier than her actions is her writing, which is sometimes where this book shines. Her turn of a phrase can catch you just right and make you laugh out loud. Like a stand-up comedian, she makes observations on the everyday that make you reflect on the perfect silliness of many “normal” things in life. Here’s one of my favorite examples: “People who think it’s so hard to find a needle in a haystack are probably not quilters. Needles find you… They should change ‘like finding a needle in a haystack’ to ‘like finding a pen that works in a drawer filled with pens that don’t work.’” Her humor is dry, constant, and relatable, which makes the book an easy read.
My only dislike about the book is that, yes, Lawson is funny, but she knows it. It’s like being in class with the kid who’s been told he’s “weird” and now that’s the only personality he fits into, so he puts it on all the time like a show. I felt like there were times she was being weird for the sake of being weird, which began to get old. I started to wonder if her stories really happened as told, or if she was embellishing them to be more silly and interesting. If they really happened as told, I started to feel for her husband, and for her daughter. I did appreciate her quest to value herself for who she is and be an active participant in her own happiness, but I started to wonder if she couldn’t still do that while maybe not waking her family up at 2am to put a saddle on the dog for her taxidermied raccoon to ride in.
That said, I did appreciate that the book is a celebration of the good times and the struggles, and it’s a testament to the rarity and value of a voice that says it’s okay not to be normal. Maybe, in that case, it’s even better that she is sometimes wacky in an extreme way. Lawson has provided a community of acceptance, comfort, and betterment for many people who find themselves on the outside of normality, whether because of disorders or simply their personalities. Her book is a call to people who are sad, hopeless, or even miserable that says that it is okay for them to, in spite of everything, do what it takes to make them happy. It celebrates that we all have value, and have to value ourselves, and sometimes put ourselves before others. And that it’s okay to ask for help and support. I loved those messages, and it was fun to see her fight for herself and improve her life. Her expressions of empathy for her husband and daughter and their interactions with her were tender and real, which I think was perhaps the best part of the book. Despite the heavy-handed quirkiness and the constant effort to shoehorn a joke into almost every sentence, I still found the book laugh-out-loud funny at some points, amusing throughout, and relatable and powerful even in spite of its zany moments.
Furiously Happy is not really a story, but more a collection of short anecdotes that paint a picture of a day-to-day life in the mind of Lawson. All the growth happens in the preface to the book, where she explains what it means to try to live in furious happiness in spite of her depression. After that, the book is snippets of her day, shining a light on her family relationships. While the stories were entertaining, I wanted to know more about her growth and about what brought her to this new life philosophy. Maybe I would have loved the book if it had started earlier and followed her along the process, documenting the struggles along the way. But that is not the book Lawson chose to write, and through the one she did choose, I can hear her voice trying, and succeeding many times, in being furiously happy.

Nicole's note: I love that Charlotte brought her voice into this book! My original post is here.
Posted by Nicole at 1:50 PM