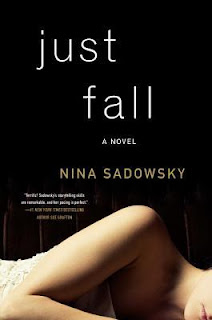 As I eased my way back into reading this spring, I read a great review of Nina Sadowsy's Just Fall, and I got it right away from the library, so I jumped strait in to this intriguing tale of murder and hidden identities.

After a string of bad dates, Ellie has finally met a man worth marrying. Rob is brilliant, handsome, and crazy for her. One problem -- he disappears on their wedding day after revealing his secret past to her. Whoops. In order to save her life -- and their marriage -- what ensues can only be described as following a diabolical, insane plan to trick the trickers and stay alive at all costs. As the secrets are slowly revealed, is anyone who they say they are?

I had simply the best time with this novel. I found Sadowsky's storytelling style to be really wonderful, bouncing back and forward in time to reveal the backstory to the reader slowly and quickly at the same time. This isn't a device that works for everyone, and not everyone can do it so that the reader stays with the story and becomes invested in the characters. The way that Sadowsky revealed the history and motivations of the characters was awe-inspiring, and I found myself page swiping (I read this in e-book format) as fast as I possibly could. This story was so well written that I whipped through this book in less than two days.

The story itself also brings up some pretty big questions about morality. Ellie is an incredibly sympathetic character, and one you start rooting for immediate. However, she is a murderer from page one. This isn't a spoiler -- this is the plot devise that starts the story. You find out almost immediately, though, that she killed for good reasons. She is immediate sympathetic EVEN THOUGH SHE IS A KILLER. As we move through the story and we get to know more about Rob, similar feelings crop up. He has killed even more than she has, yet he is someone that I found myself wanting to find and still be alive. I guess a lot of this speaks to Sadowsky's ability to create strong character arcs, but I also think she has crafted a story where everything is morally ambiguous, and this is, I think, the most amazing part of the book. What is right and what is wrong, and should these two: a) trust each other, and b) even be together at the end of the day? You be the judge. I sure know where I stand.
Posted by Nicole at 12:40 AM

Email ThisBlogThis!Share to TwitterShare to FacebookShare to Pinterest
Labels: Crime (True or Not), Everyone's Doing It, Murder and Mayhem, Novels, Thrillers