The Reversal: A Novel 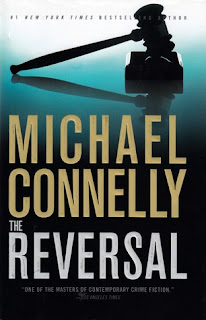 New to my "book candy" cannon is Michael Connelly. I have decided after reading a couple of the Lincoln Lawyer series that I just really really really like his books, so I am adding him to my ever-growing list of favorite writers. This was one of those paperbacks picked up at the used book store at the beach, and I was addicted the whole read to The Reversal.

I have relatively recently added Michael Connolly to my list of favorite authors. I am a little sad that I'm late to the MC party, but I guess joining the party eventually is better than not joining the party at all. I happen to have fallen in love with his Lincoln Lawyer series, and I am finding that I may be equally in love with his Harry Bosch series. I also had the pleasure of having him sign a reissue of one of his Bosch novels recently at BEA, and I started following him on Twitter, and he is hilarious. So all in all, I'm a fan.

I picked up this book a while back at my favorite used book store in John's Creek, Read it Again, and I am unsure why it took me so long to get to it. Probably has something to do with my inability to read a whole book for most of 2016, but I now feel like I'm over that hump and am back with a vengeance. I was in the mood for some murder and mayhem and something that wouldn't tax my brain too hard (i.e., not a "work book"), so I picked up the only Connelly I had on hand. Holy moly, was this one good.

Our Lincoln Lawyer, Mickey Haller, joins forces with his half brother, Harry Bosch (WHAAAAAAATTTTT?!?!?) to help put BACK away a child killer, Jessup, once convicted, now issued a new trial. A man was convicted of kidnapping and murder in the 1980's, and due to some new DNA evidence, his conviction has been thrown out and the judge has ordered a new trial. The District Attorney needs outside help, so he calls on Haller as a special prosecutor. Interested in the idea of a new, albeit temporary course, he signs up under the condition of working with his ADA ex-wife as second chair and his half brother as the investigator.

There is a mountain of circumstantial evidence, and Bosch searches out new witnesses and old. But what can they use as the smoking gun? As the trial begins, the defense is playing dirty tricks and Haller is doing what he can to stay true to his new position. However, as the trial ticks on, no one really knows where the jury is at.  Bosch keeps working and the more he finds out about Jessup, the more worried he is that the killer will strike again -- and soon. Can Haller and his team go above and beyond to prove that Jessup did it, and put him back behind bars before he hurts anyone else?

This was, above and beyond, the best Connelly book I have read to date. It was incredibly well-crafted, to the point that I was reading as fast as I could, and if I could have, I would have read EVEN FASTER. It was like I couldn't get to the punchline fast enough. I was horrified for the past; I was worried for the present; and I was terrified for the future. I know that this was all fiction, but it doesn't take a scholar to do enough basic poking around on the United States justice system to know that this type of case isn't outside the realm of possibility. It felt very much like having an insider's grasp into a high-stakes court case that felt very real. I know that  many murder cases don't have the "slam dunk" piece of evidence that helps prosecutors know they have a winning case. That's hard, and this book really showed that in an interesting, page-turning way.

I can't tell you enough how much I love love loved this novel. I have been recommending it left and right, as it was just a genuinely *great* read. It was interesting, page-turning, eyes-glued-to-the-page, "OH MY GOD READ FASTER PLEASE" kind of novel. Hence, I would recommend you read it as soon as possible. I am looking forward to diving into some more of Connelly's Bosch series this summer before I start in on the Amazon Prime series.
Posted by Nicole at 7:13 AM