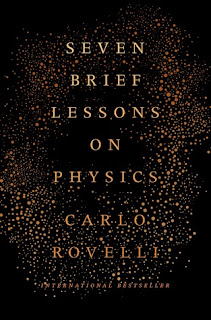 When I first saw Seven Brief Lessons On Physics by Carlo Rovelli in the bookstore, I was terribly intrigued. Science was never my strong suit in school, but as I've gotten older and wiser -- just kidding, I only appreciate learning more than I did at 16 -- I've been curious to know what makes the world. So I bought this while in Colorado at The Tattered Cover and read it on the way to Texas the following weekend.

Physics is a complicated subject but not nearly as complicated as it wants to be. This book lays out seven brief lessons, beginning with Einstein's theory of relativity, moving through quantum mechanics, and finally ending with human life and our ability to exist. It's a mind blowing treatise the takes complicated concepts and breaks them down for the everyman reader. This book was a runaway success in Italy, and it's such a shame that we can't say the same for its presence in the United States. This is the history of the discipline combined into less than 100 small pages, written for your pleasure and to make your head explode with the possibilities.

I had seen this book in several bookstores and was waiting for the right time to pick it up. Finally, I had a long trip to Dallas to meet my boyfriend's family, so I decided to start reading it on the way. I realized very quickly that I was going to need to read a chapter and take a break, not because the writing is terribly hard, but because the concepts are so big and mind blowing. I will be the first to admit that I didn't pay very much attention to physics in high school. Actually, I read Gone with the Wind and convinced my ex-boyfriend to do my work for me. I'm not necessarily proud of it, but then again, I kind of am. Guilt is a powerful force. This means that I didn't really grasp a lot of the concepts that I was supposed to have learned even though I somehow made a B in the class. (Or maybe it was a C? Can't recall exactly.)So beginning with Einstein's theory of relativity, my mind was blown. This book was written in such a down-to-earth way that I was able to grasp the concepts that really needed to sit on it for a while. Then going into things like particle physics, my mind was just absolutely wrecked with this book. I feel like I understand the basic discipline of physics so much better than I did before, even though I will never tell you that I think of myself on par with any physicist. I never really understood the concept of space bending around objects, but Rovelli described it in such exquisite detail that I actually said aloud, "Whoa." Then to move on to quantum physics and later, black holes in the ever expanding universe, I just don't even know what to say that could convince you to pick up this book more.I read this entire book with pen in hand, underlining phrases and facts, and jotting down notes. This is giving me a new appreciation to how small we as humans are in the larger realm of time and space. The idea that we are just teeny tiny specs in a little universe that is so large it's beyond our comprehension is so cool to think about. I am glad that I purchased this book, as that's when I will continue to go back to you again and again.
Posted by Nicole at 4:00 AM