Obedience to Authority: The Experiment That Challenged Human Nature 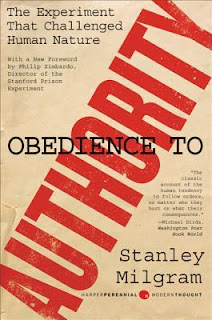 This semester I was aiming to read one work book (or 5 journal articles) per week to stay on top of my field. I didn't quite succeed the way I hoped, but I still read a great deal. (See Blackballed, Savage Inequalities, and The Prize.) This is a classic that I should have read years ago: Stanley Milgram's Obedience to Authority.

In the 1950's, a young psychologist has a difficult time wrapping his head around how a large group of people, namely the Nazis, could carry out such heinous orders that involve the death of over 6 million people. Were they horrible people who secretly harbored sadistic tendencies, or was there a greater force at work, namely, obedience to authority? Dr. Stanley Milgram set out to find an answer by creating one of the most famous experiments in the history of psychology.

Two participants are brought into a room, but one is actually working for the experiment (we call this a confederate). They are assigned roles of teacher and learner, the teacher reading a list of vocabulary words that the learner has to memorize. The subject always "picks" the role of teacher. Every time the learner is quizzed and gets a question wrong, he must be shocked by the teacher at progressively higher voltages. As the learner continues to get more wrong, the shocks go up the scale until they reach a maximum of 450 V. How many people will insist on stopping the experiment? How many people will go to the end simply because they are told to? You might be surprised.

Several years back I had a conversation with one of my roommates about this experiment. She swore up-and-down that she would have never got all the way to the end, but I seriously doubt that she's correct about her own estimation. Most people would say they would never go to the end – most people would say they are "good people." However, based on the law of averages, she most likely would have. In fact, knowing her as well as I did, she absolutely would have listened  to and obeyed authority and gone all the way to the end. We all want to think that were special and unique, but the reality is that were are all average. We are all the kind of people would probably go to the end.

This is one of the top 10 most well-known psychological experiments that has ever been conducted. Sure, there were methodological flaws (which every experiment has), but this book lays out not just the initial experiment but the dozens that followed the original. We also know that long after Milgram finished his series, this experiment has been replicated again and again. However, just the replications in this book are astounding. The variations on the relationship between the participants in the experimenter are fascinating, from whether or not you should wear a lab coat, to the location of the experiments, to the proximity of the learner, to more than one experimenter, The results are fascinating. Very few people quit early, and a decent amount go until the end. However, based on the factors altered, the numbers change.

Ultimately Milgram finds that self-proclaimed good people will easily obey authority with and without question. The end of the book breaks down the process of how large scale organizations break down individual members in order to get them to follow authority. I read it completely astounded, only because it made such complete sense that I couldn't believe it. The stripping of the individual's autonomy, The putting in place of authority figures, and the structures in place to get The little guy to listen to those in charge is something that rings true even to this day. It's historically accurate, and contemporary at the same time. This book will never go out of style because it is as appropriate today in 2016 as it was in 1962.
Posted by Nicole at 1:25 AM