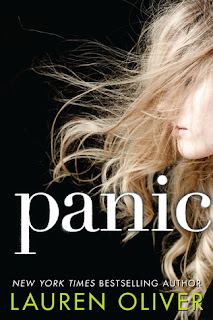 Panic is a young adult novel about a group of graduating seniors in a working-class town who participate in an end-of-high-school contest called Panic. It's a tradition in their town, with a large financial reward and lots of huge and even potentially fatal risks. The story focuses on a small group of friends who take on the game, and what they have to win and lose.

I really liked this book because I found that I couldn't put it down. I am not a big fan of scary books, and I don't like anything gory or creepy, so for me this was a chance to read something really suspenseful and a little scary without giving me nightmares. As the contest went on, I was really eager to see what the challenges would be and who would be eliminated, as well as learning more about the characters' stories and relationships.

I will admit that sometimes I was broken out of the story by some plot devices I thought were pretty unrealistic. The author really tries to hammer home the image of a poor, run-down town, and yet the prize money that's been collected by all the students in the school is huge. People have been severely injured or died in the challenges of Panic, many of which require criminal activity and would definitely be noticeable on a huge scale in a small town, but the police and school are totally incapable of catching them or stopping it. Sometimes I would stop and think, "That could not possibly happen."

I also felt like the characters were sometimes a little flat. Okay, we get it: they're poor. I kind of got the feeling that the author maybe never had been to a town like this and just picked up some stereotypes from movies about what poor people do - living in trailers, wearing trashy clothes, letting their kids have matted hair. I wished the characters were a little deeper, because I could have related to them more. Thinking about what would go through their heads as they participated in these crazy activities was one of the things that made the book interesting.

Still, with those faults, this is a great beach read or book for a weekend night when you just don't want to do anything. I definitely couldn't put it down, and I found that there were a lot of surprises and unexpected turns. It wasn't too predictable, which I think is hard for a story like this. And it kept me interested all the way through to the end. If you're looking for a quick and suspenseful read, and you're willing to suspend your skeptic's eye for a few hours, I would suggest checking out Panic.
Posted by Nicole at 1:44 AM