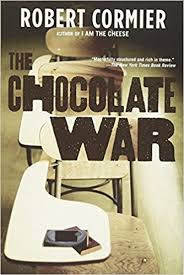 The Chocolate War, by Robert Cormier, is a book I am glad I read and a book I’m glad I did not have to read for school. Let’s start with the basics:

• It’s short.
• It has swears and sexual language in it.
• It gets put on a lot of lists of the best YA novels ever (this is why I read it).
• It gets banned by schools a lot (this is also a little bit why I read it).
• It was written in the 1970s and is kind of dated, so it can be hard to get really lost in it. I also found that the fact that it had LOTS of character who were all boys made it easy to get confused and meant that I had trouble getting lost in the book.

Like so many young adult classics, it’s a book about the dangers of mob mentality, the importance of standing up for yourself, and the ability to make an impact in an unfair world. I can’t say that I loved reading it, if only because it felt dated and I wasn’t able to really get absorbed in the book. It took a lot of energy to read. I think maybe stories set in high school, where the norms of communication and friendship change so much over time, have trouble aging well.

Thing 1: The situation is so mundane. It is easy for an author to make drama in a dramatic situation. In Lord of the Flies or 1984, for example, there is an elaborately dramatic and abnormal setting in which the reader can watch rebellion take place. In those settings, we can try to think “What would I do?” and it’s easy to tell ourselves that we would take a stand, we would be brave, we would make a difference. Those settings are separate from our reality, and while we can relate to the emotions and connect them to the real world, they are more like allegories than they are an example of day-to-day life.

But unlike an island plane crash or a dystopian future dictatorship, the setting for The Chocolate War is so, well, boring. Everyone at Jerry Renault’s school is asked to volunteer to sell chocolates for a school fundraiser, and he chooses not to volunteer. That’s it. That’s his big rebellion.

And yet, it’s everything. The beauty of this book is that you can truly see and understand how those tiny things mean so much and make such a huge impact on yourself and the world around you. The kind of things that seem like a big deal in high school and people tell you, “In ten years, you won’t even remember this.” The kind of things that make you so deeply, profoundly upset, and when you try to explain them to your parents they sound like nothing so you end up saying, “you don’t understand” or “you had to be there” and leaving it at that. Comier expertly shows how such a small action can actually be giant, and that alone is worth reading the book.

Thing 2: The hero doesn’t win. Sure, The Chocolate War is far from the first novel where the good guy doesn’t get his way. In fact, both the novels I mentioned before are good examples of the good guy not getting his way – evil wins, and the good guy must find a way to go on (or not) without getting to be a hero at all.

What’s rare, however, is for the good guy not to win in a mundane setting. It would be easy and believable for some good to come from Jerry’s protest. It wouldn’t feel cheesy or contrived – in a school setting, the reader could conceive of a victory for right over wrong. When it doesn’t come, we feel cheated in a way that we don’t in dramatic, fanciful settings. When fanciful settings have a dark and unsatisfying ending, they still have a kind of satisfaction in thinking, “I’m so glad real life isn’t like that.” The Chocolate War doesn’t deliver even that satisfaction – it just ends, unresolved and unsettling, the bad guys keeping the power. It feels bad, but small enough that it feels real, which is what makes it unshakeable.
Posted by Nicole at 12:52 AM