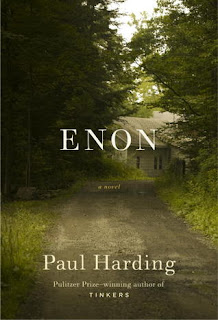 Enon by Paul Harding is a heart-wrenching tale of loss and redemption that tugged at my heart strings.

Charlie's thirteen year old daughter was killed biking home from the lake one late summer day. He didn't want her biking on that narrow path, but at some point you have to let worry go and trust your kid, right? The death of his sweet daughter tears apart his marriage and his life while it also breaks his spirit. Where is rock bottom when you have nothing left to lose? Is it possible to claw your way back to reality when you have spiraled so far down you aren't sure there is earth below you?

This is a tear-jerker, no lie. The book opens with the death, so it's no spoiler. Charlie moved his burgeoning family back to his hometown of Enon while he was still a baby himself, knowing that this idyllic setting would mean a safe upbringing for kids and a daily reassurance of contentment. Only when you least expect it, life gets in the way.

It was hard to watch Charlie's spiral down into madness; one night in the throes of grief he punches a hole in the drywall and, not heeding the doctor's warnings, quickly finds himself addicted to the pain medication. It allows him to leave the world with no thoughts of his family and no responsibilities on the table. But with nothing left to lose, is recovery and a normal life possible? Or is it even desired?

This was an emotional book that found me furrowing my brow while I sat reading it on the train. I wanted to will Charlie to care; I wanted to push him to leave his home and to just ask someone for help. I wanted him to stop his descent into madness and do his daughter's memory right, but the reality that we can't force people to make good decisions is one that smacked me in the face. The moral of the story is that we can't control the actions of others--recovery, of both addiction and of paralyzing grief, is something that must be desired or it will never be achieved.