The Signature of All Things: A Novel 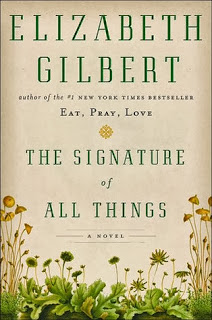 I am just madly in love with Elizabeth Gilbert, so I begged, pleaded, and cried for her new novel, The Signature of All Things.

Alma Whittaker is the daughter of Philadelphia's richest yet most eccentric man, Henry. He built up his business from nothing in England and made his fortune in discovering, producing, and selling nature. Alma, an unremarkable-looking woman but a brilliant mind, grows up in a home surrounded by the most intelligent men in the world at her dinner table. However, as she grows into a woman, she finds herself falling into spinsterhood as she cares for her widowed father and builds an internationally-known career studying mosses. As Alma is settled in to her middle-aged life, along comes Ambrose Pike--an young artist and the person who moves Alma in unspeakable ways.

Oooohhh my goodness, this book was absolutely, positively charming. I was so moved by the delicate nature of this book; it was so honest and lovely that it felt as though it were a breezy summer day in the parlor where I was taking tea with a brilliant mind. Just simply charming.

Gilbert is a deft novelist; her character development is positively stunning and she crafts a story that is incredibly well-researched and as deep as the ocean in its insightful wisdom and loving care. I felt as though the characters were being taken care of by the author, and that even when life got in the way and hurtful events took place that these characters were so beloved to the author that they could get through anything with her pen.

I found the setting to be incredibly interesting; the bulk of the story takes place in the early to mid-nineteenth century, which I will confess is not my first choice of time period. It was absolutely perfect for this story--it hit all the right notes for Alma and Ambrose, for the Whittakers and for their ilk. Alma was such a genuinely relatable character that I haven't been able to get her off my mind. I so want to have dinner with her and pick her mind and hear her stories and work through her problems with her. The prose of this story was just so brilliant. So brilliant, I say, that I lost myself in the sentences and the story and the people.

That is what I want in a book.

Kindle version on left, hard copy on right.
Posted by Nicole at 11:10 AM