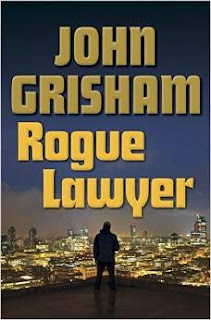 Newer John Grisham is interesting. It feels like a departure for him, even more so than mid-aughts Grisham. This is Rogue Lawyer.

Sebastian Rudd isn't your normal kind of lawyer. His last office was fire-bombed, so his current office is on wheels, driven by Partner, a former client and loyal companion. He doesn't take normal cases -- he takes the ones others don't want. Provided they can pay, of course. He is the backer of a cage fighter, and his ex-wife hates him with a passion. That's no surprise -- most of the people Rudd knows don't really like him anyway.

This first book in what looks like it can be a nice, prolonged series is a nice collection of introductory stories. It's less of a novel and more of a compilation with a through line. I compared it to The Closer, the Kyra Sedgewick TV show that ran for a few seasons. (It's one of my favorites.) What I loved about that show was that it was both a procedural and had a through-story that ran throughout the season. This book was the same way. There was an undercurrent story while still lending itself to smaller short vignettes about interesting clients. I don't always love when Grisham departs from his usual M.O., but I totally dig this one. He did a great job weaving it all together.

I also appreciate that Grisham wrote about some hard stories. He's becoming quite a social justice writer. I've quietly been watching this develop over the years, and this book was very much in that line. He has thoughts on rogue officers, and he still takes the good guy/bad guy line and makes it thick for his readers. Rudd is the only character that toes the line between on the side of right and on the side of wrong; he is, however, on the side of justice. I appreciate that in a protagonist.
Posted by Nicole at 1:51 AM No comments:

How Not to Read: Harnessing the Power of a Literature-Free Life 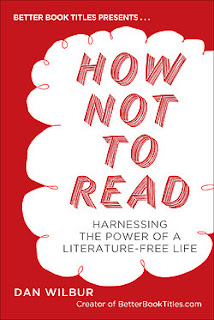 I had been waiting to read this book for some time, and one day this fall I saw it at The Strand, so I decided to pick it up. I have been following Dan Wilbur's blog Better Book Titles for a while, so I was interested in what he had to say in How Not to Read: Harnessing the Power of a Literature-Free Life.

Reading is a pain for most people. I know this – when I tell people that I love to read they look at me as though I am some sort of saint. I'm not, I'm just slightly intelligent. Dan Wilbur's blog allows readers to submit book covers with hilarious and snarky new titles describing their contents, and it's been quite a joy for many years. Dan himself is also a comedian, so the success of his blog let him to write a book with quippy anecdotes. The best part of this book, however, is the middle section filled with some of the "best of" book covers.

The rest of the book, however, is just a little "trying too hard." I enjoy Dan's Twitter feed immensely, but early on this book just felt as though it were trying to hard to be funny. I ended up skipping a few paragraphs because it felt as though it were forced and not casual enough to just giggle at. I also get where the jokes are coming from – that no one likes to read – but I also wish that this book has been a little more earnestly tongue-in-cheek as opposed to elitist. It is, after all, being read by people who enjoy reading, a good bit even, and who enjoy reading so much that they find the jokey titles made up for the new covers to be swoon-worthy.

I'm going to keep enjoying the original website, because that's where the crux of humor regarding a love of literature lies.
Posted by Nicole at 1:53 AM No comments:

You Might Remember Me: The Life and Times of Phil Hartman 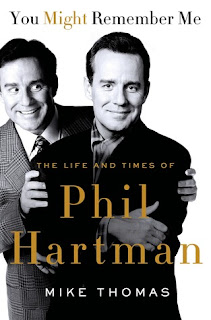 I picked this up at Book Expo 2015 with the full intention of reading it as soon as possible. I loved Phil Hartmnn (Newsradio, anyone?), and I remember his death as part of the zeitgeist. I read it very recently because my boyfriend's brother was talking about Hartman's genius, and I realized that I could pass this book on to him. This is Mike Thomas's You Might Remember Me: The Life and Times of Phil Hartman.

Phil Hartman seemed, at times, to be larger than life. How could a man so handsome and charming also be so damned funny? While he seemed like a break out talent on Saturday Night Live, the truth is that he worked for years to make it there. Through his time with the Groundlings through his work on The Simpsons and NewsRadio, Phil was known for his impressions, his heart, and his talent. His third wife, Brynn, shot him before turning the gun on herself in 1998. This book follows Phil through his life, his career, and ultimately, his death.

I was one of those fans of Hartman's, as I grew up in that particular era of SNL. All of his sketches stay with me, and while I would have liked for this book to go further, I do think it did a good job of painting Hartman as more than the circumstances behind his death. It's easy to get lost in the details surrounding his murder, especially if you are anything like me and love a good, salacious murder. I appreciated that this book went farther and spent time talking about what Hartman went though on his journey to experience success.

Thomas was quite sympathetic toward it's characters, and he was particularly kind to Brynn. He spent time talking with Hartman's family about the night they lost their son and brother, and no one appears to be bitter or angry. There is only sadness surrounding the circumstances. The focus of the book is really on Phil's childhood and his rise to fame, all of which encompasses many years of struggle and feeling lost. It's an interesting read, as it portrays Phil as a full-bodied human with flaws like the rest of it. I certainly appreciate that.
Posted by Nicole at 1:28 AM No comments:

Email ThisBlogThis!Share to TwitterShare to FacebookShare to Pinterest
Labels: Crime (True or Not), History, Non-Fiction 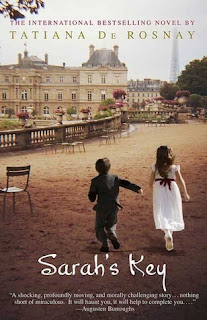 I will start this review by saying this is one of my absolute favorite books. Is there fault to be found with it? Probably. First of all, it's incredibly sad, so if that isn't your thing, don't read it. Seriously. It will be one of those books you never forget. Second of all, there is no second of all because this book will change your life.

The book includes parallel stories, one during Nazi-occupied Paris and one in present-day Paris, which eventually connect. The modern story, about an American journalist in Paris researching the Vel' d'Hiv, a roundup of Jews in Paris where thousands of men, women, and children were inhumanely imprisoned and then sent to their deaths under the direction of the French police. I found the modern story to be the less interesting of the two stories, probably because I could relate more to the second. Because I am French, I suppose, but also because I am in high school and I have a little brother.

The second story is about Sarah and is told from her perspective. Sarah is one of the children captured during the Vel' d'Hiv roundup, and her young brother is left behind. Being able to see the event through the perspective of a ten-year-old girl gives fresh meaning and humanity to the true horror of what happened. While this is detailed in many fiction and non-fiction novels about the Holocaust, there is something about Sarah's perspective that is emotionally raw, because she simply did not see it coming and does not understand what is happening. The dramatic irony of reading as you know more about her future than she does truly makes you feel sick to your stomach. Her feelings of guilt, anger, and sadness, none of which are her fault, come through in a real way from the perspective of a child.

I did feel that the book got a little less interesting to me once Sarah's story was resolved, because I was less interested in the present-day journalist and her actions. I liked that parallel motifs throughout, tying together Sarah's story with the present day. But I had trouble relating to Julia, the present-day protagonist, only because her struggles seemed so small in comparison to Sarah's story. Your husband making jokes about you, for example, must feel awful and is truly deserving of empathy. But in the setting of Sarah's heart-wrenching and truly maddening story, it is hard not to view Julia's problems as paltry.

I have read Sarah's Key before, but I think this is an important time to read it again. We have all seen the pictures of children in Syria being hurt by bombings, but it's easy to move on from them without connecting them to real emotions. This book helped me to think from those children's perspectives and remember how scared, alone, and unfair they must feel. I think as the rhetoric of the American presidential election grew more hateful and more dismissive of whole groups of people, it's important to be reminded of the humanity of each person, no matter how small, and to see how easily politics can change so that evil is done and no one is empowered to stop it.

Sarah's Key will leave you feeling uneasy and upset, but, as Julia points out about uncovering the story of the Vel' d'Hiv, maybe we owe it to those who suffered to hear, know, and acknowledge their stories.
Posted by Nicole at 1:37 AM No comments: