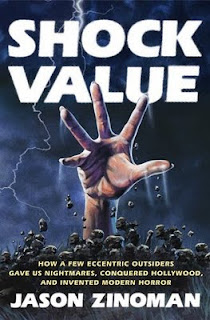 As soon as I read the review in Entertainment Weekly (and a few other locations) I knew I had to pick up this book.  Shock Value: How a few eccentric outsiders gave us nightmares, conquered Hollywood, and invented modern horror by Jason Zinoman is a fantastic retrospective of the horror movie genre of New Horror and the geniuses that came out of this era.

The 1970's saw some of the greatest horror movies released: Rosemary's Baby, Halloween, Alien, The Hills Have Eyes, The Texas Chain Saw Massacre, and Carrie to name just a smattering (yes, yes, yes, there are many more--this is just a smattering).  These movies bucked convention of Old Horror, which was made up primarily of vampire and monster movies.  These new films frightened their audience with the unknown; they took a page from the great dramatists of the time (such as Pinter) and played into the fears of what will never go away: a fear of what you can't see and can't ever truly know.

I agree with Zinoman's conclusion that few if any modern horror films can come close to what the geniuses of the generation established: John Carpenter, Wes Craven, Dan O'Bannon, Brian DePalma, and Roman Polanski.  They created the rules because the rules did not exist before (hell, they were making up New Horror as they went along!), and they followed the rules very closely because the rules were belonged to them in the first place.

I was fascinated by Zinoman's detailed history because Halloween is still one of my favorite movies.  Very few films have scared me like this one has, consistently, since I first saw it as a college student (I know, really two decades plus after it was released in 1978, but I can't help my childhood fear of fear...or when I was born).  To be able to put it into historical context was meaningful and insightful for me, and I loved that I took away from this book a strong sense of artistry from the Masters of Horror.

Zinoman gives us a proper history of this niche genre, and the book is well worth a read if you are a movie fan.  The book is a must if you are a horror fan.  And if you love history of film--well, what are you doing still reading this review?  Pick up the book already.
Posted by Nicole at 8:33 AM