The Far End of Happy: A Novel 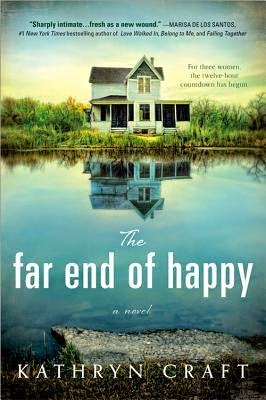 The Far End of Happy, by Kathryn Craft, had me at "standoff." You know I love this stuff. It kept me around, however, because of so much more.

Today is the day that Jeff moves out. Ronnie Farnham knows that today will be difficult for everyone -- her, the children, her estranged husband. She doesn't have a clue how bad it's about to get. Jeff locks himself in their farm stand office with a shotgun and unlimited amounts of alcohol. The authorities are brought in, and there begins a long standoff between a suicidal man who believes he has nothing to live for and the world who wants to save him.

This book is based off a real event in the author's life, and I wish I could know what happened. This may be the next best thing. What I found to be the most interesting part of this story was the use of the standoff to explore relationships in every part of Ronnie's life. She went to journalism school in New York only to find herself back home in her small east coast town. Her mother was hoping she would fall in love with her best friend's son, and lo and behold that is what happens. When Ronnie sees the 12-years-older Jeff after many years apart, it's love at first sight. She stays to marry him, but as the years push forward he pulls away.

That relationship was interesting enough, but it was the one between the mothers that was also fascinating. Jeff's mother and Ronnie's mother have been friends for decades, and the bond (and tension) between the two adds another dimension to an already harrowing story. We as the readers figure out very early on that Ronnie's father committed suicide, but Ronnie is the last to know. It adds to the events even if at times it feels like you just want it out on the table for crying out loud.

One frustrating part of this book was Jeff's mother's feelings toward Ronnie and the delusional point of view she held toward her son. Everything was Ronnie's fault until the very end, and even some more then. It's hard being the objective reader on the outside, because while I could completely understand why she thinks this way, it's difficult as an outside reader to feel like I can justify her selfishness for a whole book. Then again, I'm not a mother, so take that with a grain of salt.

I found myself wanting to read until the end, even if the ending was a forgone conclusion. The final moments of a mixture of love and pain are well worth hanging on until the end. Life is a journey, or so I've heard, and we have to take the good with the bad and roll with the punches. If we don't, it's sure going to be a long ride.

For purchase below.
Posted by Nicole at 1:25 PM