See How Small: A Novel 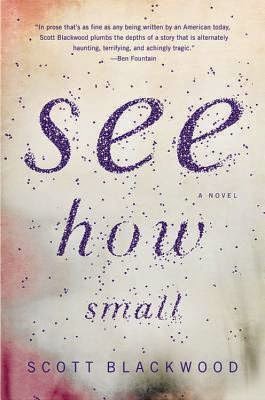 I love a Sunday where I can lay on the couch and read a whole book start to finish. This weekend it was Scott Blackwood's See How Small.

Three young girls are closing up the local ice cream shop. Two men walk in, and soon those three girls are no more. The aftermath of the lives of everyone in town are deeply affected -- the parents, the inadvertent driver of the getaway car, the fireman who found the girls, those who just simply grew up there. No one's lives are the same, and as they learn to cope with what they have seen and experienced, their lives must go on, together and apart. How do humans move on from tragedy?

Blackwood may arguably be writing the most beautiful prose out today. This is a hard topic to cover, and I should know, because I will read anything where people are killed. This, though, is harder than most, because for one reason or another, it feels close to home. A small town where everyone knows each other. A local ice cream parlor, where everyone grabs a cone at some point during the night. A family owned business that has sent their only children to work the counter. An owner who was supposed to pick up the deposit that night, but didn't. A reporter who is covering the hardest story of her life. A young boy who just thought he was making some pocket change but was roped into so much more.

It's a hard book to read, but it's made a bit easier by the girls coming to visit those they love from the afterlife. It's not mystical or whimsical--it's just simple in its delicacy. There is no yearning for what might have been (from the girls at least), but rather it's a quiet acceptance and a desire to watch over those they know need it. On the fifth anniversary of their death, the town and the survivors reel in their own way -- is it time to finally tear down the shell of the ice cream parlor that has sat there the whole time? Is it time to move on and find love again? When will we ever forgive? Is forgetting ever an option?

This short novel packs a huge punch, and it is beautifully written with maximum care for the reader. It is heavy but not weighty, honest yet not morose. It is worth a look for the beautifully prose and the lovely story of coming to grips with an unspeakable tragedy.

For purchase below.
Posted by Nicole at 4:19 AM

Email ThisBlogThis!Share to TwitterShare to FacebookShare to Pinterest
Labels: Crime (True or Not), eBooks, Novels