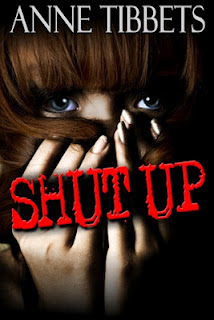 Shut Up by Anne Tibbets is a YA novel that is perfectly suited for every young female who feels annoyed and frustrated by her family.

Mary is your typical 12-year-old--except that her older sister, Gwen, makes her life miserable.  Gwen never stops screaming at her entire family and makes Mary feel lower than dirt, and things have only been worse since Gwen got knocked up by her creepy boyfriend.  When Gwen marries and moves out things get so much better for the entire family--until the day Gwen is forced to move back.

This novella is short but sweet--Tibbets doesn't waste a word in her writing, and I certainly appreciate that.  It's hard not to relate to Mary's feelings of anger toward her family and isolation from her life.  Mary is clearly dealing with depression and that is something with which many young people can identify, along with feelings of lack of belonging.

There is the undercurrent in the story about a possible sexual assault on the antagonist, Gwen, and I wish it had been explored a bit more.  This was the explanation for Gwen's change in attitude and her selection of her boyfriend, The Creep.  It would have extended the story a bit more, although I understand why Tibbets made the choices that she did--it's clearly Mary's story, from her perspective about her feelings.

Email ThisBlogThis!Share to TwitterShare to FacebookShare to Pinterest
Labels: eBooks, YA Lit