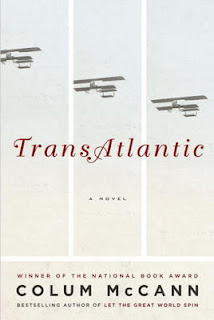 Colum McCann's Let the Great World Spin was simply magnificent, so when a little birdie told me that McCann had a new book coming out, I snagged a galley so that you, dear readers, could have first pick at purchase! (And because I really really really wanted to read it.)

In 1919, two men build a plane that will cross the Atlantic and land in Ireland. In 1845, Frederick Douglass tours Erin in response to his abolitionist treatise. In 1998 a senator arrives in Ireland to broker a peace in ideology. Three different eras, but one very same ideal--that of Ireland, and of the belief that in something greater than themselves.

Someone once described McCann to me as "hypnotic," and I was shocked that I hadn't thought to describe his writing as such before. When I read McCann's writing I feel completely and utterly transported to another realm of being, one that makes me feel as though I am much more high minded and lofty than I often feel. I lose hours in his books, and I lose my sense of self in such a glorious way--that of becoming one with the narrator and with the story at hand. That, my friends, is an awesome feeling.

McCann creates characters that are strong and steady regardless of their thoughts or actions. They are consistent and they are well-formed; they are flawed and they are honest. They are nothing if not true human beings in the most basic sense. I love this man's writing, and when I closed the last page of the book I knew I would never be the same. I have become a more fully formed person. How marvelous, yes?

Kindle on left, hard copy on right. What are you waiting for?