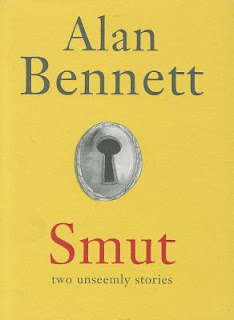 This book contains two stories, each revolving around sex but without sex being the main character.  The first story is "The Greening of Mrs. Donaldson," in which an older Mrs. Donaldson finds herself in a precarious yet thrilling position with her two college-age lodgers who can't pay rent.  The second story, "The Shielding of Mrs. Forbes," follows the dalliances of Mrs. Forbes's son, Graham, who happens to be gay yet is married to someone who, as Mrs. Forbes believes, is 'below him'.

I was so ridiculously and wholly thrilled by this little book.  Seriously, it's half the size of a regular book and it's only 150 pages.  You will zip through it.  These stories were so intriguing and not-quite-predictable-but-they-still-kinda-are-at-the-same-time.

The characters are immediately fleshed out and clear, and I wanted to personally know every single one of them.  To me, the most glorious things that can happen with a book is to either feel as though it is a memoir when it is really a novel or to feel as though you are a fly on the wall of another person's life (or people's lives) for a time.  I felt the latter with this lovely little ditty, and I am so grateful it came in to my life.  At alternating times the stories were silly, heartfelt, exciting, and shocking.  You know--what a good short story should be.
Posted by Nicole at 12:31 PM